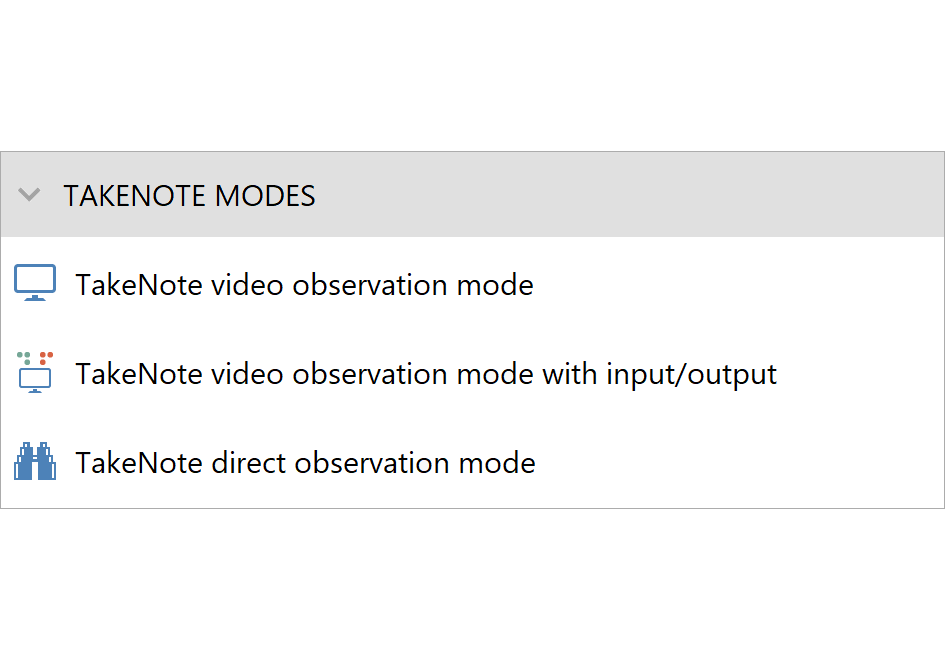 In some experiments you will simply observe the animals’ behaviour and score it manually – for example, this is quite common when studying sexual behaviour. You might think that because ANY-maze is a video tracking system, it wouldn’t really be suitable for this – but in fact it’s exactly what ANY-maze’s TakeNote modes are for.

In this article, I’ll explore the three TakeNote modes that ANY-maze includes and I’ll describe how you can use them to manually score your animals’ behaviour, either using keys on the computer’s keyboard, or virtual keys on a touchscreen.

The common theme to all of the TakeNote modes is that you are manually scoring the animal’s behaviour, but how? Traditionally this would be done using stopwatches and click-counters, but in ANY-maze you simply have to include some Keys in the protocol. For example, you might set up a key to score Licking, perhaps using the L key, and another to score Scratching, using the S key. So you’ll simply press L when the animal licks and S when it scratches.

If you want to know the duration of a behaviour then you can hold the key down while it is occurring and ANY-maze will subsequently report, amongst many other things, the total duration of the bouts. Of course some behaviours may last a long time, in which case you can set a key so that pressing it once signals that a behaviour has started and pressing it again signals that it has ended – so you don’t have to hold it down for the entire time.

As well as using keys on the computer’s keyboard, you can also set up ‘virtual keys’ on a touch screen – in this case you can set the size and position of the virtual keys, as in the figure below. Obviously this does require that you’re using a computer with a touchscreen, but these are quite common in notebook computers and of course are standard in all tablets. By the way, ANY-maze includes a touchscreen mode, which alters the size and spacing of things like buttons and menus, making it much easier to work on these devices.

Scoring behaviour while observing the animal is fine, provided you only want to score a few things – for example, it would probably be quite easy to watch the animal and score Licking or Scratching using the virtual keys shown above. But what if you want to score lots of behaviours? You can certainly set up many keys in ANY-maze, but it will probably be very hard to observe the animal and score all the behaviours at the same time.

This is where ANY-maze’s option to Add additional scoring to a test comes in handy. In essence this allows you to repeatedly watch a video of a test and score different behaviours each time. For example, you might watch the animals live and score Licking and Scratching; then you could replay a video of the test and score Sniffing and Grooming; then you might watch it again and score Feeding and Drinking. There’s no limit to how many times you can do this, and no rules about how many behaviours you score on each review – so you could do just one each time if you wish. An important point here is that ANY-maze knows that the video you are watching is of the same test as you already scored, so all the results are correctly merged together with the timing of all the different events automatically aligned.

In some situations you may wish to visualise the animals’ behaviour across time – perhaps to find out whether scratching bouts occur across the whole duration of a test, or whether they tend to follow some pattern. In this case, visualising the behaviour in a Chart can be a big help.

ANY-maze can report a wide range of results for each of the behaviours you are scoring, including

Many of these can be reported for the entire test as well as for fixed length time-bins (for example, each minute of the test) or for arbitrary time periods (for example, the period from 10 minutes until 25 minutes in the test).

In common with all results in ANY-maze, data can be collated by groups, for example by the animals’ treatment, sex or age, and graphed or analysed using around forty different built-in statistical tests.

Naturally, the data can also be exported in a simple spreadsheet format for easy transfer to other programs such as SPSS.

The ANY-maze TakeNote modes are designed specifically for manually scoring observed behaviour either using keys on the computer’s keyboard, or virtual keys on a touchscreen. As well as being much easier to do than using stopwatches and click-counters, the richness of the data collected and the power and flexibility of the available analysis make this far more attractive than traditional techniques.

If you own ANY-maze, then the TakeNote modes are already available to you (just can just select them in the Protocol), or you can purchase an inexpensive TakeNote-only licence for around $ 495.00.

Back to all blogs

Stay up to date with new features, updates and equipment.
Sign up to our newsletter and get the latest news directly to your inbox.