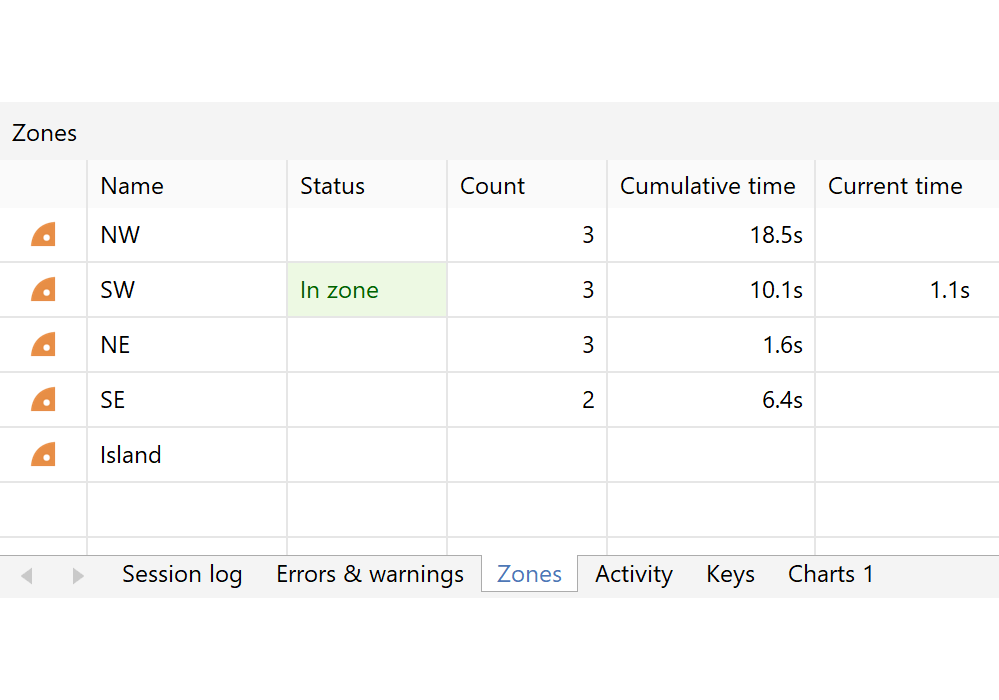 Version 7.00 is a major update to ANY-maze and includes a wide range of new features and improvements; check out all the details below.

On the Tests page, real-time information about tests is now displayed in a series of panels. In this example, the Video panel is ‘promoted’ (so it is always visible), and the other panels are selectable through the tabs at the bottom of the page.

A wide range of panels are available, including panels to show:

The keys panel not only shows the state of any keys you are using to score behaviours, but also allows you to layout your own virtual keys for use with a touch screen, as in the image below. Other panels include a Session log, which can show a wealth of information about the tests you’re performing, and an Errors and warnings panel which reports issues that could affect the tests, for example, a pellet dispenser running out of pellets, or a disk getting full while recording a video.

All the panels provide real-time information during tests. For example, the I/O panel shows you live information about all inputs and outputs, such as what sound a speaker is playing and how much longer it will play for, whether a shocker is on or off, how many pellets a pellet dispenser has dispensed so far, etc.

Panels can be shown or hidden, and reorganised to suit your own preferences and requirements. Standard operant components, such as levers, lights, pellet dispensers, etc. plug straight into the interface, which connects directly to the PC via USB.

You can tell ANY-maze about the components you have connected using a user-friendly configuration window and it then automatically adds all the components into your protocol ready to use. ANY-maze’s easy-to-use but powerful procedures can then be used to define how you’d like the components to work in your tests. In the example below, the procedure will either deliver a shock or a pellet, depending on the state of the stimulus light. ANY-maze seamlessly supports multiple Operant interfaces. For example, if you have 20 operant cages, then you can easily configure all the interfaces for all the cages simultaneously and then add them all to your protocol in one go.

ANY-maze will report lots of measures, such as how often the animal investigated the zone, for how long, what the latency to investigation was, etc.

This new feature is especially useful in the Novel Object Recognition Test – see the picture below – but it can be used in any situation where you want to know how much time the animal spends investigating a part of the apparatus. Here, the animal is ‘investigating’ the object because: its head is within 25mm of it (the dotted line shows the investigation area), it is oriented towards the object (the flashlight-like beam shows the orientation) and it is not on top of the object.

As part of the work on investigation zones, we also improved how ANY-maze shows the animal’s orientation. As can be seen in the figure above, orientation is now indicated by something like a flashlight beam; ANY-maze considers the animal to be oriented towards anything this beam touches. You can specify the width of the beam, thus controlling how loose or tight the definition of orientation is.

Track plots and heat maps have been completely redesigned

In version 7 we have redesigned heat maps and track plots and incorporated many customer requests and suggestions. We’re always working on the tracking in ANY-maze and in version 7 we have made a number of improvements especially to head tracking, which now works well even in low contrast or poor quality images (although it is still limited to tracking the heads of rodents).

Check out the video below, where ANY-maze version 7 robustly tracks the animal’s head, despite the chequered background and the low image quality.

Of course we appreciate that you won’t want to change the tracking system in the middle of an experiment, or even between experiments (if you’re running a series of experiments and plan to compare their results), so you can choose whether ANY-maze should use the old version 6 tracking engine or the new one from version 7.

In V7 freezing detection has been simplified by removal of the old freezing threshold values. ANY-maze now determines the freezing threshold automatically, although you can adjust the sensitivity (i.e. how much movement is acceptable while still considering the animal to be freezing) to suit your experiment.

Again, we’ve included an option to use the old version 6 freezing detection method if you wish.

ANY-maze now highlights errors and warnings in your protocol

In version 7 the protocol list now shows error and warning markers to highlight parts of the protocol that might need your attention. Pointing at a marked item will pop-up a message explaining what the issue is – see the image below. A great thing about the error markers is that when you first create a protocol all the compulsory elements are marked (because they’re missing data), so you can easily see the minimum that you need to do to make your protocol usable.

We’ve done lots of work under-the-hood in version 7 to make it run faster and smarter. It now takes full advantage of the latest microprocessors and also uses the computer’s graphics processor where it can. The upshot of this is that you will find that ANY-maze starts-up more rapidly, results are analysed faster and reports open more quickly – even if you have lots of apparatus and long duration tests.

Other new features and improvements

Back to all blogs

Stay up to date with new features, updates and equipment.
Sign up to our newsletter and get the latest news directly to your inbox.